Under the Jamun Tree - A chapter of My Childhood

With the onset of monsoon, the fruit sellers of the Indian local market have a part of their cart displaying these black/purple shiny plums. So, it's that time of the year when the Mango is about to leave but the Jamuns are waiting to ease our Mango-sickness!!

But with the Jamuns (or as the world knows it "Java Plum"), comes the memories of earthy aroma, of the monsoon soil, the fiercely swaying branches of the Jamun Tree in our backyard, a train or two speeding beyond the colony's last wall and our last look at the cloth line to ensure all the clothes had been moved indoors.

My parents moved 2000 kms away from their home state for a central govt. job at the printing press of Nasik, then just a small town in the state of Maharashtra. Having migrated to a new place, there was no permanent home for the longest duration I remember. So, we moved homes frequently from one govt. quarter to another or sometimes to a rented apartment and back to the govt. quarters. These central qovt. quarters had been our home for the longest time.

Staying in these government provided quarters meant, living in a little seperate town with minimal contact from the outside world. Every kid knew the other kid even if he / she stayed 10 doors away. Almost everyone in the colony knew whose kid you where. That meant, any mischief you were part of, would be reported to your father or mother and you knew what to expect back home from the playground.

Moving to Our govt. quarter -

This quarter I mention here, was an old construction, with stone wall as thick as two feet, heavy wooden doors, tiled roof tops of ceilings as high as 15-20 feet and weird looking ceiling fans that were hung by long metal rods. Most of these ceiling fans made an annoying sound but we got used to it with time. The floors were roughly cemented. There was a little pavement in the front porch followed by a scooter shade. The backyard was the highlight of these quarters. More so because the bathroom and the toilet were across the backyard with a little washing area next to it. As young dwellers, we were scared to visit the bathrooms at night without an elder accompanying. But the one thing I keep thinking about often these days, is the Jamun tree in the corner of our backyard.

When we first moved here, that kind of a house was new to us and an adventurous experience. On our first night at the house, we were woken up by some screeching noise. When my mother braved to switch on the lamps, we found two large rats jumping and fighting on our mosquito nets. Thanks for those nets, or else they would have been dancing on our bellies. Soon we realised, these little creatures were a regular here.

There quarters were said to have been built in the British era before India's Independence, so everything bulky and heavy meant, it had been passed down from our 70 year old predecessors. The bulky walls, big switchboards, heavy ceiling fans, artistic wall lamps, a fire place; all seemed vintage to us as kids.

And back to the rats, they were there because they had made little holes in the ceiling and stayed in the gap between the tiled roof and the separating cardboard layer. They had made little holes for their access into the house. Following few days we identified the gaps and filled them up. But they would often find a new way out. We had eventually made peace with their co-existence. I remember, one night before my board exams, I was reading by the window when a little one came down to accompany me and silently sat on my shoulder until I realized it was there. I don't know if I scared it or it scared me.

If not the rats, we had the cats waiting for a chance to sneak in from a window or the back door. They came for milk or fish, a common in a Bengali household. One of it had once braved picking a fish from the hot pan on the stove. This fish-lifter cat was then served the entire pan full of fish, because we couldn't have something tasted by a stray animal. There were occasional spotting of monkeys jumping from Jamun and Mango trees all afternoon and the neighboring kids hooting in amusement.

The backyard was our favourite spot and the Jamun tree was the witness of it all.

From dawn to dusk, the Jamun tree saw us rushing by the day, occasionally lazing in its shade or counting the number of leaves it had shed. Summer holidays and weekends had a special place under the Jamun tree and a daring sneak out of the backyard gate, mindful that our mother shouldn't find us there. The sneaking out was mostly to get a glimpse of the trains passing by the adjoining railway track or to look for any fallen mangoes before the neighboring kids picked them up. So, under the Jamun tree we sat with the collection of mangoes, sorting the raw and ripe, sprinkling salt and chili on the raw once, cut into tiny pieces and relishing the tangy, salty pieces through the afternoon. The ripe ones were rubbed in our palms to soften the pulp and then sipped through a tiny hole we bit in the mango skin. Mangoes were our comfort food through out the summer. When the mangoes were gone, along came the Jamuns.

Under the Jamun Tree -

We knew when the Jamuns were about to fall and were on a watch out, that they didn't spoil our dresses on the clothes line. At times we tried spreading bed-sheets but they fell down even with the slightest breeze. With time we were content with the fallen, half smashed jamuns. Our backyard would be coloured in patches of violet or purple but that would get washed by the house help every morning. We collected the jamuns in a bowl, sprinkled sugar and salt and shook it vigorously until the pulp was supple. Even a handful of jamun, from our daily collection were so treasured. These black grape-like textured fruit had a unique taste; sweet, bitter and acidic!

Occasionally we had neighbors coming for a share of the fruits, listing its numerous health benefits. A few fruit sellers also inquired, if we were willing to sell the produce.

As young kids we were not bothered about any health benefits. We only knew they tasted great and were our favourite ritual of the summer vacation.

Also, we had many memories with my grandparents under the Jamun tree. They visited occasionally. But that meant the Jamun tree had company while we were at school. My retired grandfather took up the task of picking dry leaves, often ignored by us. My sister and my grandfather had their games and fights under the Jamun tree until grandma intervened. Me being a lazy kid always fell pray of grandma's scoldings to get physically active. She would often make me jump ropes under the Jamun tree. On occasions, we also had a make shift salon below the tree. When I needed a trim, grandma's tailoring skills showed wonders on my hairs. I was impressed she had not chopped of my traces like the salon technician and only cut the desired length.

Ironically, we have no image clicked in this house or even under the Jamun tree. Its only my memories that often flashes images in front of my eyes.

After us the Jamun tree must have seen many more visitors and many naughty kids. Or who knows if it has been abandoned, with no new visitors.

Perhaps, the Jamun tree has many more stories to share...if only any souls to hear! I am sure the birds and bees still visit you! I know they love you more than us for they didn't leave you with time like we did!

About the Jamun Tree - 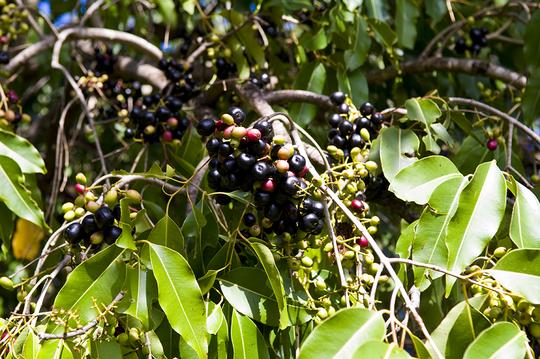 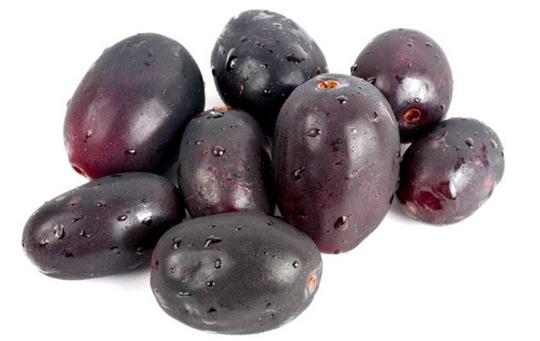 Jamun or the Indian blackberry is an indigenous fruit, common in the countries of India, Pakistan, Bangladesh and Nepal. It is a seasonal fruit and appears only between May to July. The trees can grow as tall as 60 to 100 feet in height and flowers between February and March. Jamuns are often referred as the fruit of Gods in Indian mythology.

The British too considered planting Jamuns around the government office premises and thus can be found there in large numbers.

Elders in India can list many health benefits of the Jamun and how its seeds can be preserved in dry powder form to be consumed through out the year. Its the home cure to diabetes. Jamun juices are good for digestion and to avoid anemia. There are many more endless reasons to count on Jamun,s health benefits.

But more than all of that, Jamuns are often remembered in many of our grandma's stories. The Jamun Tree is an emotion for many like me who have tales to share from, under the Jamun tree.

Not far from home - A weekend escape to Coorg amidst the pandemic!

How travelling changed my perspective towards life and the world!

Under the Jamun Tree - A chapter of My Childhood

Kashmir - A rendezvous in Paradise